I chose an afternoon bike-and-hike yesterday in lieu of doing my post here. So here’s the update on yesterday.

Started by milking goats. I volunteer and get to keep the milk in return. Plus I get to take a morning drive down the coast, marvel at the beauty of the rolling hills, and smile at the bleating goats and clucking chickens and long-eyelashed llama at the farm.

Ever milk a goat? My first time was earlier this year. I learned that you spend an unexpectedly long time sitting unsettlingly close to the back of the goat. I was assured by Farmer Bobby, my goat milking trainer, on that first day, that the goats are anatomically incapable of kicking backward. So the fact that I am inches away from its two back legs shouldn’t concern me.

Still, it felt a little daunting to be seated so close to the hind legs of an animal who could probably injure me with a swift kick of those legs. In that position of vulnerability, I armored myself with the authority of swiftness and firm vocal commands.

This time, since I am in the midst of this process of collecting image ideas for 50|50, I noticed how my face was positioned right below the tail of the goat for, oh, 45 minutes or so as I milked. Occasionally, Spot (the black-and-white-spotted goat) would turn around the look at me, as if to say, “How ya doing back there?”.

She also had one episode of lying down on all fours, in her version of a protest to the whole process. She is notorious for being uncooperative and sometimes totally insubordinate to the milking process. But today, for just one moment, it occurred to me that maybe she isn’t deliberately not cooperating. Maybe she is exquisitely sensitive and expressive of her feelings. Maybe she just won’t take any *%&# from anyone, even for a few handfuls of oats and grains as a treat.

That shifted everything about my timing, touch, and reactions to her occasional hoof stomping during the milking. Instead of saying, “Hey, Spot!”, and trying to coach her into obedience, I thought to myself, “Hmm, what does she need? A break? OK. Maybe I’m tugging a little too hard, in my haste to get it done faster so she won’t be so annoyed with me. Instead of scolding her (even silently in my head) when she used her nose to knock the wooden guardrails off the milking stand, I asked, “What is she trying to tell me? To be more mindful? To slow down? To be more gentle?”

I have no idea if this mindset affected Spot’s cooperation with milking, but it changed me. I was no longer at battle with her, but rather listening, open, and more present with myself. Less tense and in a hurry to get it over with. More willing to smile, breathe, and be firm but gentle.

I saw that I was not the only vulnerable one in the process. And in that seeing, we became friends.

So for this experience, Spot earns a panel in the 50|50 show:

And here are some other scenes and work from yesterday: 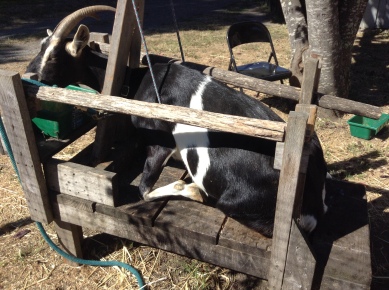 Spot, during a moment of complete insubordination 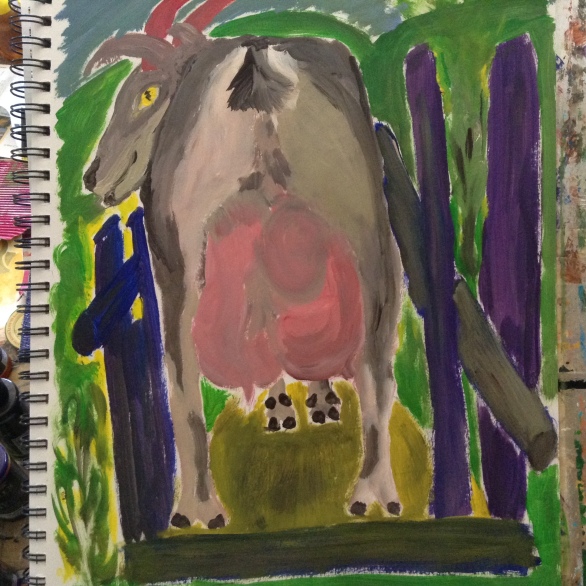